Day 1 01-02-2012
Meeting up with everybody at Schiphol around 12:30 to fly to Mexico City and avoid the Dutch winter. It’s my first time on the road with WT, so I have to remember like 12 names and shapes and colors of about 30 cases. The flight was quite easy though, and at arrival the Mexican crew was ready to bring us to our hotel fast as usual.

I took the guitars up to my room for re-stringing. I knew tomorrow was gonna be hectic and after an overseas flight it’s necessary to put some new strings on, I think.

Day 2 02-02-2012
Circo Volador in Mexico City is like a second home at this point. The venue and the crew are just always awesome to me!

For my first show, with WT, it was a lot of figuring out how things are supposed to be. But soon enough I found my way around the gear and the artists. I was very happy I made the decision not to go to a bar and start re-stringing last night.

The show went well and even with the many guitar changes and little things I think I did pretty well for a first!

Day 3 03-02-2012
A reasonable night of sleep it was time to move to Quito, Equador. Normally it’s pretty do-able, but now we had to make a stop in Panama City. With a layover of about an hour it took us quite some time to get where we needed to be! Yet again I decided to re-string a bunch of guitars so I didn’t have to do ‘em all at once

Day 4 04-02-2012
I never can breath in Equador. Quito is just too high for me. And like they all knew that I suffer in this country, they build a stage with 10 step stairs. My world was going to be on the floor and for each change I had to climb the stairs. I made a bet with myself that I would die that day, but luckily I lost that bet.

But it wasn’t too much fun! The show was awesome though!

Earlier in the day one of the amps blew because the local backliner plugged it in an unmarked 220V outlet. I couldn’t really blame him but I had to wait around for a few hours till they got a replacement.

Right before the show we had a great steak at The Alamo in Quito. I’m way better organized already so the rest of the shows should be easier for me, although it still is a lot of work!

Day 5 05-02-2012
It turned out by the voice on the phone that I overslept. We had to be ready at 6:45 to travel to the airport, have the usual check-in madness and fly to Lima. But like I said I overslept about an hour, so we eventually left around 7:00. But luckily it was not only my fault! Three other overslept too!

With not much sleep on the plane we arrived at our hotel in Lima. It was a nice hotel with more than enough facilities around it, so I was happy!

It’s a great offday! I had a great Parilla lunch/dinner and a bath too! I’m enjoying my Corona’s while I type this up!

Day 6 06-02-2012
I spent the first half of the day at the rooftop pool with Ruud and Stefan, while the others went to the beach. We decided at one point to do the same. The view was great and we decided to walk down for a drink and some food.
A nice pier bistro gave us some rest and protection from the hot sun.
I got sunburnt at the rooftop.
We were invited by the Dutch embassy to come down for a get together. There were some fans but also some other Dutchies to welcome us. There was more than enough to drink and eat! Thanks to the Dutch tax payers!

Day 7 07-02-2012
I finally found my favorite stringcleaner wipes at a local musicstore near the venue. We had awesome chicken for lunch and some great tastes of different meats for dinner. The show went pretty smooth although there weren’t too many people.

Day 8 08-02-2012
We arrive at the Marriot around 8:30 in the morning. Our lobbycall was at 12:00 so we had a few hours to catch some sleep, have breakfast and wash up.
Setup went smooth, and the local crew was very helpful. I had some issues with one of the wireless systems but in the end we sorted it all out.
During the 2nd song of the set the power dropped. We had to start over and it dropped again. It took us about 30minutes to get the show going again. But in the meantime concentration was lost and tiredness hit us again.
The crowd was great though and in the end the show was fun!

Day 9 09-02-2012
This day sucked pretty hard. We flew from Santiago to Chile, but they booked us a layover flight. So we had to change planes in Mendoza. Because it was a point of entry they unloaded our 33 cases for us to check in again. Security check went superslow and therefor we missed our connection. Waiting for about 4 hours at an airport with nothing to do is insane! Even the postcards were too boring to send home. Else I could have spent some time writing them.
Anyway we got some food and drinks and in the end we had the flight. It took us about 8 hours what normally costed us 2. No offday in BA for us. Which sucked cause I loved to see my BA friends!

Day 10 10-02-2012
I love BA!
It was a small stage, so our setup was smaller than usual.
But we took it easy. One of Stefan’s guitars was warped, so I had some serious work to do. Next to all the serious work I had been doing already. I made it playable again, but it wouldn’t be great. I have to keep an eye on that one the next days! The promotor is great again and we went to his restaurant for dinner! Great dinner!

Day 11 11-02-2012
Waking up at 6:00 to have breakfast before flying to Sao Paulo is too early. Flying in on showday sucks! But it has to be done! Catching some sleep in the plane before having a long day in venue. Turned out we lost our backdrop on the way over. Saw some familiar faces in the crew which is always great! The stage was weird, but we made it work anyway. Because the security was really strict they needed to check everybody from head to toe. Which delayed the show for 30 minutes because half the crowd was still waiting in line to get in. Show was great! The hotel sucked though! The beds were too small and the airco didn’t work!

Day 12 12-02-2012
Flying into the show in the morning again! IT was so fucking hot outside it wasn’t even funny! And there we were in Circo Voador, a building without walls. Sweating like crazy. The setup went slow, soundcheck went fast. We were all ready for this one! We enjoyed the pre-carnaval party in the afternoon. So many people were there and great music!
After show I saw hometown friends Chiel and Kirsten for a short bit, it was fun to run into them in Rio! Since there were no bars around the hotel we decided to stay in, in the end Tommy and I managed to stay up till 5:00. The beerbringers were setting up breakfast even! Haha!

Day 13 13-03-2012
On our last day of tour we arranged a van to go to the statue of Jesus.
Lucas our promotor joined our small group. It was nice to see the great view over the city and to see the statue up close.
On our way back to the hotel we past Copa Cobana beach where Joost and Bennie took a dive into the sea. It was a great ending of the tour!

Day 14 14-03-2012
I slept all the way from Rio to Paris, enjoyed some croissants and slept some more from PAris to Amsterdam. 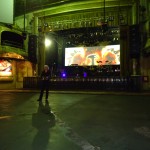 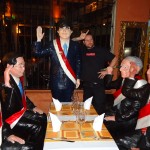 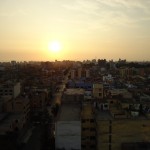 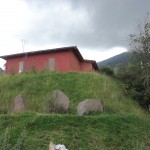 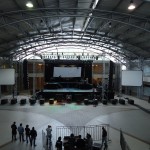 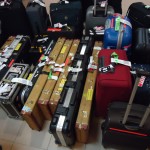 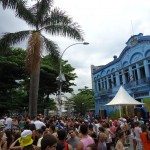 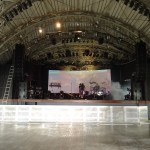