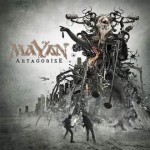 Even with their hectic schedules the people behind MaYaN found a way to write and record a second album.
“Antagonize” will be released in January and will be followed up by some live performances within The Netherlands.
Since I’ve been involved with them since their first “Quarterpast Tour” I’m looking forward to join them on the road again!