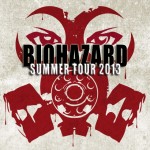 On quite a short notice I will be tech-ing for BIOHAZARD on a 5 show run through Germany, The Netherlands and Belgium.
Biohazard is a band originally based in Brooklyn, New York. They are acknowledged as one of the earliest bands to fuse hardcore punk and heavy metal with elements of hip hop.