28-02-2012 Setup
We got one whole day to get to know the gear we work with and to loom cables and such.
Pretty cool! But it was gonna be a long day anyways. I had to setup the Groundcontrol Pro’s and a had to rebuild Ruud’s FX-rack. Eventually I did all that plus restringing all guitars. Setting up a spare Spector bass.

29-02-2012 Soundcheck & Rehearsal
Soundcheck day! My Groundcontrol’s work! I am happy! Today I received two Martin acoustic guitars and a pretty looking Fretless bass, so I had to do some more re-stringing.
Rehearsals went fine. It’s great when a band do their final rehearsals in the live setup!
I’m impressed by the end result. Great lighting, video, sound… Looks great!

01-03-2012 Dress Rehearsal & 1st show
Rehearsals went pretty good. Robbert (former WT-guitarist) is directing the rehearsals and show.
All went pretty smooth I’d say. Loading out was also pretty quick! I carpooled home with Benny (monitor engineer)
After this first show I was still missing some things. So I had to order some stuff here and there.

07-03-2012 Utrecht
After a quick visit to Feedback (music store) I arrived to Vredenburg. The building is a temporary place for shows. So it doesn’t really have a nice atmosphere. But it’s nice to work there.
Both trailers were able to dock on and we started setting up.
Nothing special happened today. The load out was taking a bit longer cause we really had to put the “floor” gear in one truck and the “roof” gear in the other since we can put only one truck at the time on the elevator in Eindhoven.

11-03-2012 Eindhoven
After a sweet sunday morning ride I arrived in Eindhoven. My TomTom was acting weird and aparantly I didn’t read the callsheet to well. I arrived at the venue, which was in the middle of a shopping area, and I found out that there was no where to park, so I drove around finding a place closeby.
The first trailer was getting unloaded while I walked in too early and heard from Rob, our TM, that I had to park somewhere else. So I went to do that.
The venue was small. So we all had to improvise with our setups. During show I fucked up the outro of “Lost”. My In-Ears went dead and there was no light on stage so I thought the song was over. So I switched to the next guitar. But that was a bit to quick! Damn!
5 minutes after show I was in my car driving home for the night.

12-03-2012 Eindhoven
Another day in Eindhoven! Hope today goes better, cause it’s my Birthday! 30 years old and still kicking!
I powered up my gear, changed some strings and we did a short soundcheck. I brought in some apple pie and during dinner the band & crew sang me a b-day song! The show went by fast and things went smooth. Load out was pretty quick too! Driving home was a nice midnight ride. I was glad I eventually found my car in the parking. I should start writing my parkinglocation down..

14-03-2012 Zwolle
I’m usually a bit earlier at the venue than it is actually time to work, also today. But the Drivers and some locals already unloaded the first truck. Which was fine by me, cause loading and unloading trucks isn’t my favorite part of a WT working day. Although I honestly must say the workout can be nice from time to time.

17-03-2012 Tilburg
Thanks to my friend Eva, I was able to have an overnight in Tilburg. I took a Taxi to the Theatre and we started loading in. Setup went pretty smooth and finally I was ahead of things.
Then a call came in that Ruud, one of my guitarist, wasn’t able to perform that night due to a back injury. They decided to do a show anyway with Robbert (ex-WT guitarist) on guitar.
I restrung & setup his Gibson Flying V as quick as I was able to and instructed him about the new amp & fx setups.
The show went by fast and so did the breakdown and load out.
It was a great night! Too bad Ruud wasn’t able to perform in his hometown!

20-03-2012 Breda
Too be honest I don’t remember any special thing about this day. Ruud is back in the game though! I carpooled with Bennie again which is always nice! Load was fast I remember..

21-03-2012 Heerlen
Good to be back at Parkstad Theater! Earlier this year I was there with both Revamp and Epica. Now I’m here with WT. The local crew is pretty damn awesome here and it is always nice to see some familiar faces, like my old Epica-colleague Oele!
It turned out that there would be video and audio recordings for this show. So also my MFS-tourmanager CJ was there to do some audio recordings. Overall it was a nice and easy day. We stayed in Heerlen cause we had a show tomorrow too! So we went to the hotel bar! HAd some drinks with the guys and galls! Overall a nice day!

22-03-2012 Heerlen
The first part of the day was all about close-up filming. The first 4 rows of the theater seats were removed to put in a crane. We went trough the complete show in the afternoon. Which of course is quite an energy eater for the complete crew. But i’m sure the footage turned out nice!
The show went very well. The vibe was allright in Limburg!

24-03-2012 Groningen
Just another gig for me. Nothing special really. There are a lot of hallways and a loot of doors. This place is not really for me. There is no real vibe. which is weird cause all the big ones performed here!
It is what it is, I’m glad it is a two in a row show!

25-03-2012 Groningen
Day two in Grunn started with breakfast at the hotel. Totally unsatisfied iI went into town with some collegues, watching churches, squares and of course ending up at a bar.
Since noon just passed and we didn’t have to be in the venue till 18:00 I decided to have lunch and whatnot. Eventually I went to the venue to start working on some things. Restringing and fine tuning some stuff. I ran into some fans. Cyril, the Frenchie, was there and some others. I met Madelon, who was also wandering around, waiting for the doors to open which they didn’t till hours later. So I took her out to town. Mainly cause she believed we could go on top of the Martini tower. anyway, she showed me around and we had a great time! The show went smooth and so did the load out. Bennie and I drove back to the Veluwe quickly to get some sleep at home!

26-03-2012 Roosendaal
For me the last show of this tour. i heard horror stories about this theatre, but things seem to be cool. Even better this is the coolest show for me on this tour!
Last one. It was good. 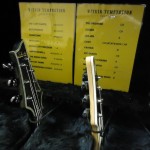 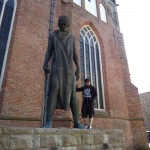